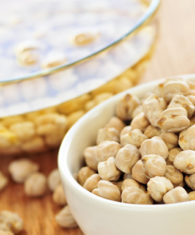 The new crop of Kabuli type chick peas ( Mexican ) was all set to be good, during gulf food exhibition held in Dubai. there was very little movement and demand for Indian Kabuli chick peas new crop, as Mexico new crop was heard to be traded at USD 1050/- levels for march / April shipments, to Mersin port – Turkey.

Indian Kabuli chick peas were then offered at levels of USD 950- 970 levels for march/shipments, to Mersin port- turkey.
everyone was assuming Indian chick peas prices to come down. after exhibition to levels of USD 900 or under, for Mersin port, due to lack of demand,
in previous years normally during these time, Indian exporters would have being comfortably traded over say 25000 mts of Kabuli chick peas for new crop march – April shipment, but this year, it was an unusual situation, it was heard, that all the major buying destination like Turkey, Algeria, Europe, middle east were well covered with old stocks, so demand will be slow till April.
due these factors the activity was very slow during first two days gulf food exhibition,
but due to some unexpected weather change in India, especially in produce center of chick peas . from last Wednesday to Friday, it was raining all over . with big ice balls, making a substantial damage to the crop, and suddenly markets become active,
it is estimated the total crop to be under 380000 mts compared to 700000 mts of last year approx. with big quality problem of rain damage and stained grains, there is reported a heavy loss to the standing crop, and hope for good exports year in terms of quality and quantity pf chick peas is know to look a dream
since last weekend, markets are very firm and Indian exporters of chick peas are active collecting the local crop & also turned their interest to new crop of Mexico chick peas for Indian ports, and had traded at levels of USD 1100/- cnf Nava Sheva port, for march – April shipments
already markets had improved in terms of prices and everyone know is in a bullish tone for Kabuli chick peas
it is looking these year prices can be very firm looking the damage of new crop of Indian Kabuli chick peas and we can look a repeat of the year 2010-2011 & 2011-2012 where we witnessed price for USD 1800 cnf Mersin ports.
please find the pictures for the ice balls and damage
please fine the link of the rainfall news for your reference.